On 27 May 2018 at the XXVIII Congress of FIDE (Fédération Internationale pour le Droit Européen/International Federation for European Law) at Estoril, Portugal, Martin Howe QC, Chairman of Lawyers for Britain, took part in a panel on Brexit following the speech to the Congress by Michel Barnier, the EU’s Brexit negotiatior.

The full text of M. Barnier’s speech is available as a Commission press release and is reported on Bloomberg and Politico.

Panel Chairman: Prof Vassilios Skouris,  Former President of the Court of Justice of the European Union

Lord (Jonathan) Mance,  Deputy President of the Supreme Court of the United Kingdom

Kieran Bradley, Special Adviser to the CJEU on Brexit

“The reasons why the people of the United Kingdom voted to leave the European Union are often misunderstood, particularly on this side of the Channel.

M. Barnier has told us that as a young Gaullist one of his first political activities was to campaign in the French referendum on the admission of the United Kingdom, Ireland and Denmark to the EEC. A few years later I was just old enough to vote in the first referendum we held in 1975. I voted in favour of the UK staying in the EEC.

He was later Margaret Thatcher’s Foreign Secretary and Deputy Prime Minister. His conflicts with her about European policy are well known and eventually led to her departure from office.

But despite this personal background, and despite my original support for our membership of the EEC, by the time of the 2016 referendum I was firmly convinced that the right path for my country was to leave the European Union. So I was pleased to lead the lawyers’ official campaign group for a ‘Leave’ vote.

The fundamental reason is this. The ever growing spread of EU laws into wider and wider areas removes the democratic right of the British people to live under laws which are decided upon by their elected representatives in Parliament.

The spread of Community law (and later EU law) and the consequent loss of sovereignty has always been regarded in the UK as a negative feature of our membership. It has been tolerated in the past, because it was perceived to be in the economic and trading interests of the UK to join a trade bloc with internal free trade.

But alongside the ever wider spread of EU law, the pattern of the UK economy has been changing in ways that dramatically reduce the benefits and increase the disadvantages of belonging to such a bloc.

Let us look at this chart from Eurostat which shows how much of their goods exports each Member State exports within the EU as compared with its exports outside the EU: 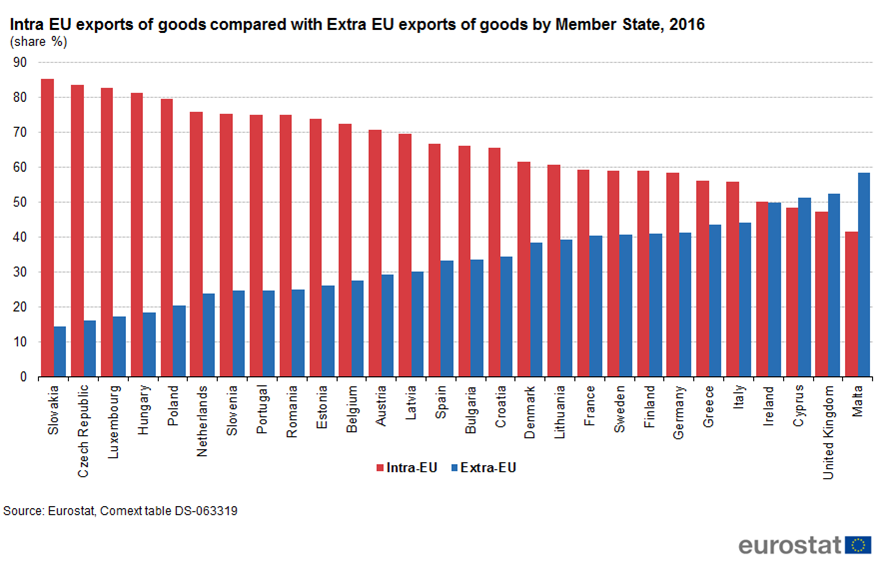 This chart shows that, apart from tiny Malta, the United Kingdom has the lowest percentage of any Member State of exports to other states within the EU. More than half of our goods exports go outside the EU. For goods and services combined, 57% of our exports now go to non-EU destinations according to the latest 2016 figures.

This unusual trade pattern means that only a minority of our exports benefit from free trade inside the EU, while we suffer disproportionately from the inability to conduct our own international trade policy.

The long term trend over the last 20 years has been for our EU trade to diminish relative to our trade with the rest of the world, which has been strongly growin. Another Eurostat table shows the trends in exports of goods within the EU between 2002 and 2016: 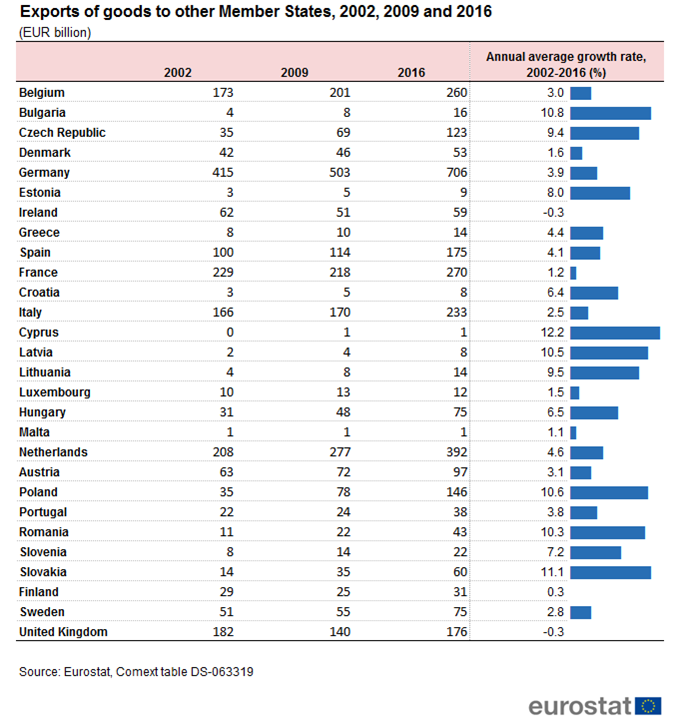 Most member states show healthy growth in their exports to other Member States within the EU single market and customs union. For example, Germany’s exports have grown by 3.9% average over the period since 2002, while many of the newer Member States have achieved spectacular growth rates.

In stark contrast, the UK’s average annual growth in intra-EU goods exports over that period has been negative, at -0.3%. So in contrast to other Member States, the benefit which the UK has obtained from membership of the single market and the customs union is not large, if indeed it exists at all.

And this trend will continue. The UK’s trade with high growth economies around the world will become ever more important relative to our trade with the EU27.  This is why it is essential to us not only to regain control of our internal laws but also of our international trade policy.

The fundamental differences between the UK and the Continental economies were famously the subject of comment by President de Gaulle in 1963 when he vetoed our original application to join the EEC: 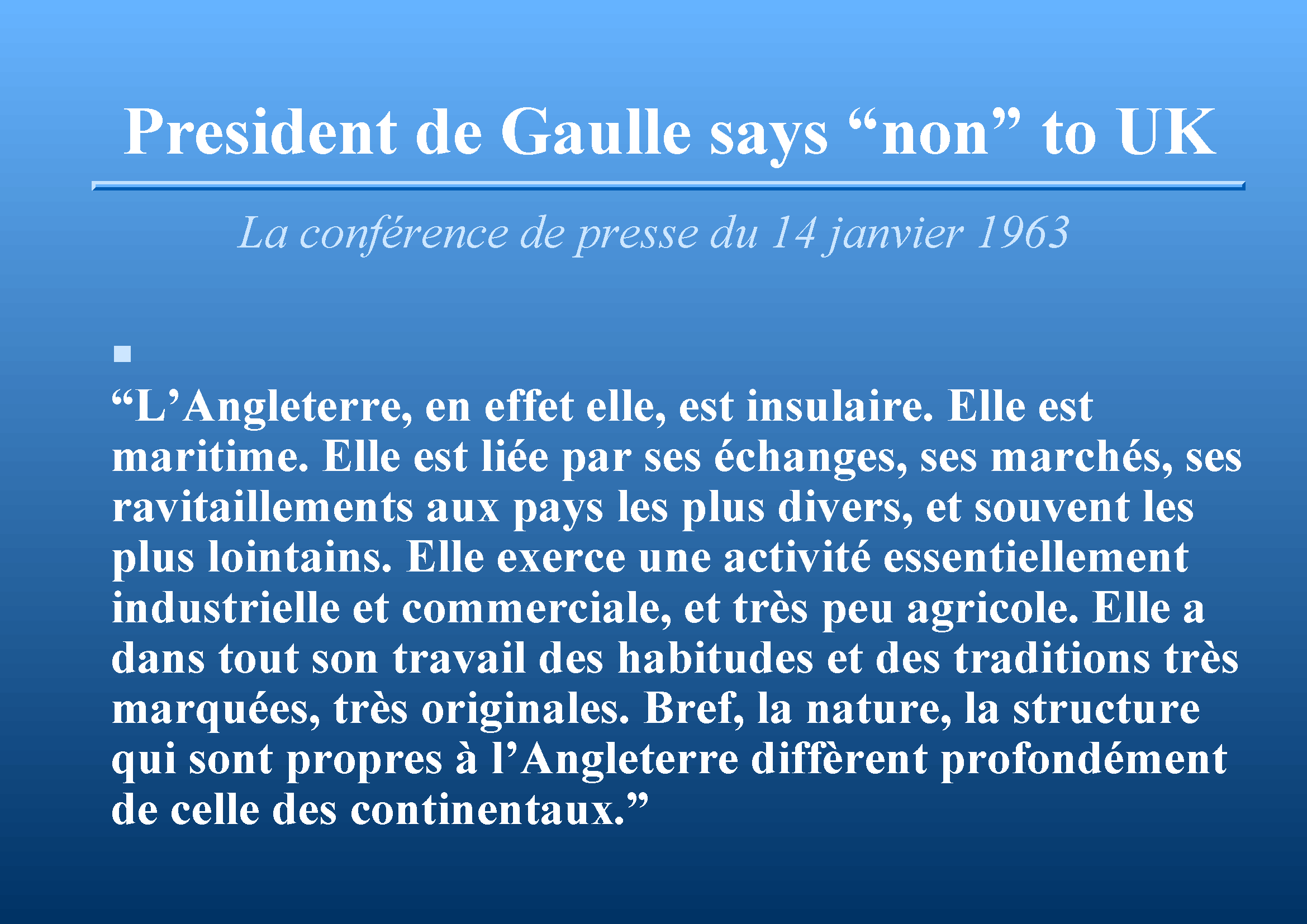 “England in effect is insular, she is maritime, she is linked through her exchanges, her markets, her supply lines to the most diverse and often the most distant countries; she pursues essentially industrial and commercial activities, and only slight agricultural ones. She has in all her doings very marked and very original habits and traditions. In short, the nature, the structure, that are England’s differ profoundly from those of the continentals.”

I leave aside the General’s suggestion that linkage to distant markets around the world implies insularity; rather, it involves engagement with the wider world outside the confines of the European continent. But the fundamental differences which he identified in the structure of our economy and of our global trading links have, as I have demonstrated, not diminished but rather have become even more marked over the last 20 years.

The UK’s departure from the EU is not born from any hostility towards the EU, still less towards the peoples of Europe. It is just that our future paths are so different that it serves neither the interests of the UK nor of the EU for our membership to continue.

Our future relationship must I believe be based on mutual respect. In particular, complete respect for the autonomy of the European Union law on the one hand and the United Kingdom’s legal system on the other.

I am in complete agreement with one aspect of M. Barnier’s remarks. Half-baked half-in half-out solutions for our post-Brexit relationship will not work in the interests of either party. In this category I would place the so-called “customs partnership” which is still, regrettably, being considered by the British government. Apart from its other manifest deficiencies, this proposal would compromise the autonomy of the UK by requiring UK customs authorities to administer EU customs rules and collect EU tariffs, and compromise the autonomy of the EU by requiring Member State customs authorities to apply UK rules and collect UK level tariffs on imports from third countries.

Mutual respect and independence and autonomy of legal systems

Our courts systems need to be autonomous from each other. After Brexit, the Court of Justice will cease to be a multi-national court in which the UK participates as a member equally with other Member States, and become as far as the UK is concerned an entirely foreign court rightly owing its allegiance to the EU and its Member States alone.

It is contrary to international treaty practice for a sovereign state to accept to be bound by the rulings of the judicial or other organs of the other treaty party. It is also contrary to the EU’s own practice: we cannot find any examples where a non-Member State has accepted the direct jurisdiction of the Court of Justice. Even the Association Agreement of tiny Andorra provides for resolution of disputes by a neutral 3-member arbitration body.

However, non-binding coordination of interpretation is desirable, particularly where it involves treaty provisions in an EU-UK treaty, or the interpretation of laws which remain the same in parallel in the EU and the UK. Mutual respect for judgments in these situations is entirely in accordance with the normal norms of judicial comity, provided that each court is free at the end of the day to decide its case in accordance with its own conscience.

Although it does not involve direct jurisdiction by the ECJ, the EEC-Turkey agreement which creates a customs union between the EU and Turkey requires Turkey to follow and apply the jurisprudence of the ECJ on all matters relating to tariffs and also in a number of related areas which affect the import and circulation of goods.

This illustrates the fact that a customs union can only operate if all the relevant rules and the way in which they are interpreted are closely harmonised for now and into the future. For the UK to remain in customs union with the EU after we have ceased to be a Member State would inevitably involve a huge and permanent loss of sovereignty over tariffs and over all the non-tariff rules and laws which apply to goods placed on the market. This huge and permanent loss of sovereignty would damage our democracy and is unacceptable for this reason, quite apart from the fact that it would destroy any prospect of the UK implementing its own international trade policy.

Both the customs union and the EU internal market involve dynamic systems of rules which need to be kept in line with each other in every participating state in order for the systems to function properly. For this reason both the EU-Turkey customs union and the EEA Agreement involve mechanisms by which the client states are required to align the interpretation of their rules to the rulings of the ECJ as well as legislative changes made now and in the future by the ECJ.

It is for this reason, and this reason alone – adherence in the future to a dynamic system of rules which must be interpreted consistently – that it is necessary that the courts of these States must comply with future rulings of a foreign court.

This consideration does not exist in the case of the UK. M. Barnier argues that the provisions of an EU-UK treaty which are based on concepts of EU should be interpreted in the future by the ECJ in a way which binds the UK.

M. Barnier’s argument is entirely fallacious. Where the UK agrees (as for example in the case of certain rights of EU citizens in the UK and UK citizens in the EU) to base rights in the treaty on the extent of the rights currently enjoyed under EU law, this does not create a dynamic linkage between the acquired rights of these citizens and the future rights of EU citizens within the remaining Member States. The rights acquired by citizens at the point of the UK’s departure are frozen in time and will not, and should not, develop in line with whatever changes might be made by the ECJ’s jurisprudence to the rights of e.g. French citizens resident in Germany internally to the EU. Those EU-internal rights will no doubt continue to develop but that development should have no bearing on the rights and obligations of the United Kingdom under the withdrawal agreement.

To accept binding future ECJ interpretation of rights under the withdrawal agreement is tantamount to the United Kingdom writing a blank cheque into which the organs of the EU can write new treaty obligations which the UK never voluntarily assumed when it agreed to the treaty. This is, as the EU and all its organs should recognise, entirely incompatible with the international treaty practice of sovereign states.”